Las Vegas, Nev. – President and founder of All In Aviation, Paul Sallach, recently earned two prestigious recognitions. First, Sallach was selected as an Honorary Commander of the U.S. Air Force, and subsequently earned the 2022 Young Alumni Achievement Award from his alma mater, the University of North Dakota (UND), the world’s leading aviation university. 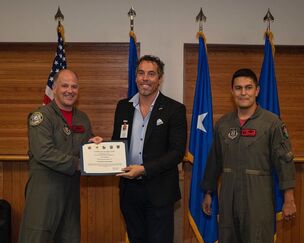 “Being inducted as an Honorary Commander of the U.S. Air Force at Nellis Air Force Base is an incredible honor,” said Sallach. “I look forward to bridging the gap between the Southern Nevada civilian community and our local military base while representing the general aviation industry.”

The goal of the Nellis Air Force Base Honorary Commander program is to engage, educate and empower local, regional and national-level community leaders to be advocates for the USAF, Airmen and their families. Honorary Commander participants are selected for their position or influence in the community and their ability to have a positive impact on public support for USAF and Nellis missions.

As an Honorary Commander, Sallach will serve as a key communicator and USAF advocate in the Southern Nevada community. His involvement and insight as a Southern Nevada business owner and resident will help establish opportunities for the military to build and strengthen community bonds while informing and educating other community leaders on military matters. 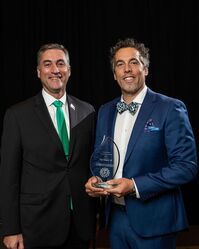 “Being honored by my alma mater is a big deal to me,” added Sallach. “I owe UND a lot because their aviation education program and instructors who helped shape me into the pilot and business owner I am today. The knowledge and experience I gained there gave me the confidence to open my own flight school and aviation company, All In Aviation. UND will always have a place in my heart and family, since it’s where I met my beautiful wife Lindsay, who is also a pilot, flight instructor and co-owner of All In Aviation.”​
​About All In Aviation:
The only Cirrus Aircraft training partner in Southern Nevada, All In Aviation is a full-service aviation company offering flight training, pilot certifications, and aircraft rental, sales, management & storage.

​Dedicated to growing and developing more pilots, All In Aviation is a trusted partner for aviation training, from a student’s very first flight through some of the most advanced pilot certifications. With an emphasis on quality customer care, All In Aviation’s flight instruction is led by highly experienced and professional certified flight instructors.

As a Cirrus Platinum Training Center, All In Aviation’s fleet includes some of the safest and most sophisticated aircraft on the market. The best-selling aircraft in the world, Cirrus airplanes are equipped with glass panels, air conditioning, and whole airframe parachute systems.